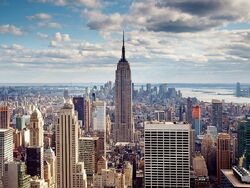 The show Jessie takes place here and Jessie Prescott moves to the city to start a new life, eventually becoming a nanny to four children from a billionaire family who live in an apartment penthouse.

Retrieved from "https://jessie.fandom.com/wiki/New_York_City?oldid=100534"
Community content is available under CC-BY-SA unless otherwise noted.